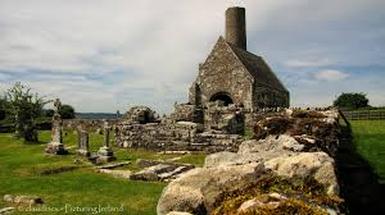 The island's name, Inis Cealtra, means the "island of the burials"; or "of monastic cells". The island lies about 1km from the mainland and 2km from Mountshannon. Holy Island is a historic place with its roots in early Irish Christian times. Pilgrims travelled here for hundreds of years right up to the mid 19th century. Inis Cealtra is associated with several Irish saints of the sixth and seventh centuries most notably St Caimin who founded a monastery here during that period. The Vikings burned the monastery in 836 and again in 922. In this period the remains of the Western Roman Empire were being over-run by mostly non-Christian tribes. But Ireland kept Christianity alive in the outlying parts of Western Europe. Celtic monks later reintroduced Christianity to Northern Britain and several other parts of Europe. The island remained in active occupation until the thirteenth century despite numerous attacks from Norse raiders and others. 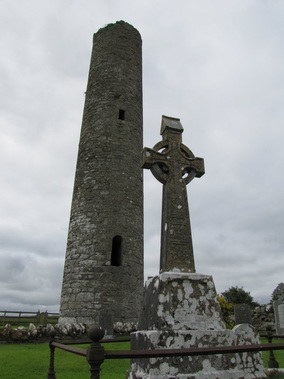 The island is also associated with the famous Irish chieftain Brian Boru. His brother was abbot here and Brian is said to have built one of the churches on the island. The 50 acre site boasts the remains of no less than 6 churches, an early monastic cell, a cemetery with more than 80 recumbent  graves with an inscription or cross , the most recent of which dates to the 12th century. In one of the graves lie the remains of 10 men, who were probably butchered together by the Norsemen. The dominant feature on the island is an 80-foot tall round tower.
You can walk among the ruins of churches, the round tower and several crosses, all built before the year 1000.  Romanesque arches from the twelfth century can also be seen. It continued as a place of pilgrimage up until fairly recently and is still very much revered as a holy place by people of the locality.  Among its other attractions are bullaun stones, grave slabs, a holy well and bargaining stones. His is a large island higher than the surrounding ones with open fields which are given over to grazing, the animals being brought over by the boat. There are trees and shrub bushes around the edge of the island. It is covered with narcissus in the spring also yarrow, cuckoo flower and birdsfoot trefoil. Many studies of this Holy Monastic site have been made and it was excavated extensively during the 1970s, by one of Ireland's leading archaeologists, Professor Liam de Paor. 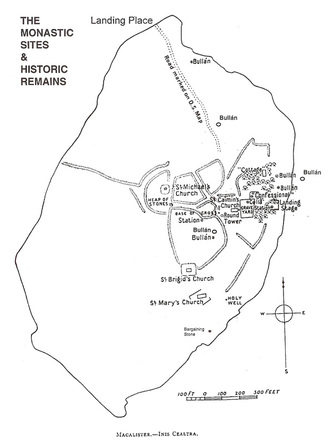 This island appears to be a magnet which attracted over the centuries a wide variety of people, Irish and Continental, pilgrims and plunderers.

The first recorded hermit was MacCriche who lived on the island before the year 550 as recorded in the Annals. The fertile 50 acres of land and the availability of stones for building primitive dwellings and forts as a protection from raiders, the island's position on the Shannon and its accessibility by water would have suited these early inhabitants. When the first Benedictine monks, St. Colum and his followers, founded the monastery in the 6th century, they attracted a large band of followers which continued through the centuries. Students from afar sailed up the Shannon to be educated in Inis Cealtra, where its fame as a scholastic institution and place of learning was renowned particularly when St. Caimin was abbot.

The Vikings were drawn by the wealth of the monastery and plundered it mercilessly, until they were defeated by Brian Boru who visited this island several times and where his brother Marcan was Bishop-Abbot in the 10th century. In the 17th century pilgrims flocked to its shores to do penance and have their sins forgiven. Part of the pilgrimage was walking around the island seven times. This was brought to an end in 1846 as over the years it had become a very festive occasion where every excess could be indulged with no fear of any sin having been committed as they were still on Holy ground. Pilgrims would also have come up the Shannon by boat.